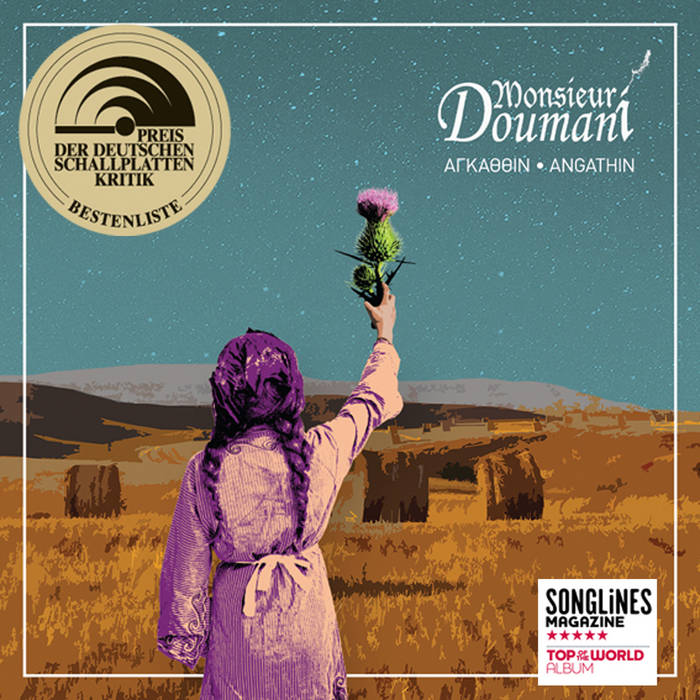 Following the international success of their two previous albums, Cypriot group Monsieur Doumani returns with its third release titled Angathin. The album consists almost exclusively of original compositions and it essentially picks up from where their previous multi-award-winning album 'Sikoses' (2015) left them. The album with the symbolic name ‘Angathin’ (which translates as ‘thorn’) addresses more than ever, the political, social and activist concerns and sensitivities of the group members and it is a call for rebellion against corruption, racism and injustice. The songs are inspired, among other things, by the unstable political situation on the divided island of Cyprus and the need for peace and reunification, as well as environmental crimes committed in the name of economic growth and profit. Musically, the mood for experimentation is obvious both in terms of composition and arranging as well as texture-wise, while the album develops new unexpected relationships in melody, rhythm, harmony and timbre. Angathin’s musical language is built on the coordinates of traditional Cypriot music but is infiltrated by elements from many other genres such as rock, blues, hip-hop, punk, psychedelia, balkan etc.

‘Angathin’ also stands out for a wide range of collaborations. Popular Cypriot songwriter Alkinoos Ioannidis and perhaps the most important contemporary representative of Cypriot traditional music Michalis Terlikkas interpret a song each on the album. The participation of the talented Cypriot rapper JUΛIO brings a fresh air to the project as well as the unexpected participation of perhaps the greatest contemporary Greek songwriter Thanasis Papakonstantinou. Moreover, the acclaimed Cypriot composer based in St Petersburg, Andreas Kameris, has arranged one of the pieces (the hidden track [not included on the vinyl) for choir, performed in the Greek-Cypriot dialect by the Russian vocal ensemble Fortis. Last but not least, the charismatic Greek vibraphonist and drummer Alexandros Gagatsis gives rhythm to one of the tracks with his udu drum.

All tracks recorded and mixed by Makis Pelopidas at Ahos Studio, Megalovriso-Greece
Except:
#11 by Nikolas Prokopiou at ToneDeaf-Nicosia
#Hidden track by Fedor Naumov at St.Petersburg Documentary Film Studio

Distributed by Xango (Benelux) and Proper (rest of the world)