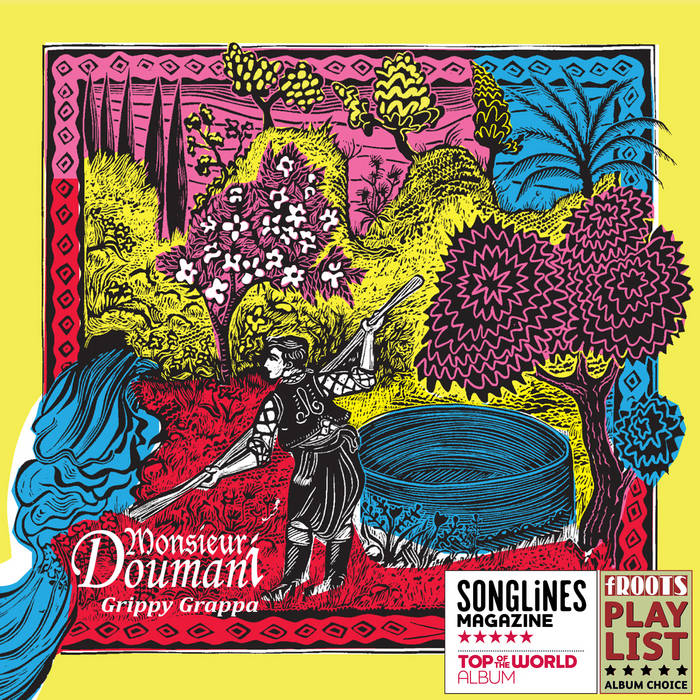 EleutheriaPL Multicoloured threads fill the fabric of Cypriot tunes without getting muddled or motley, Tylliria being the most exquisite tissue. Seems as if a nonet were involved in this meticulous weave. Tsiakkara’s treble stretches in a triple skein, and System’s heaviest spool seems to uncoil turbulently three octaves deeper yet. The band’s each banner has been basted here, with System as the prominent one. Favorite track: The system / Το σύστημα.

"Grippy Grappa is a spirited collection of traditional and contemporary Cypriot music through the lens of Monsieur Doumani, a group formed by some of Cyprus’ most interesting musicians" -World Music Central

Grippy Grappa is the title of Monsieur Doumani’s debut album, an album that has gained them a nomination for ‘Best Newcomer’ group in the acclaimed Songlines Music Awards 2014. The album Grippy Grappa has received excellent reviews from international media such as the British newspaper The Guardian, the French magazine Les Inrockuptibles and the music magazine fRoots. The album was amongst the Top of the World Albums according to the 95th issue of Songlines magazine and it reached no.12 in World Music Network’s August charts. In addition, the video clip of one of the album's songs called 'Out-of-touch guy' reached no.4 on World Music Network's November video charts. The album was also presented by radio stations worldwide such as BBC, Radio France, Sveriges Radio, RootsWorld Radio, PBS 106.7FM Melbourne, KDVS California and more.

Grippy Grappa was produced in Nicosia, Cyprus and comprises of 11 rearrangements of traditional Cypriot songs plus 3 original compositions. The album’s cover is the work of the well-known Cypriot artist, Hambis Tsangaris from his book Spanos and the 40 Dragons. His son Giorgos Tsangaris has adapted the work with colour. The design of the album’s layout is the work of Lara Alphas.
For more information visit: www.monsieurdoumani.com