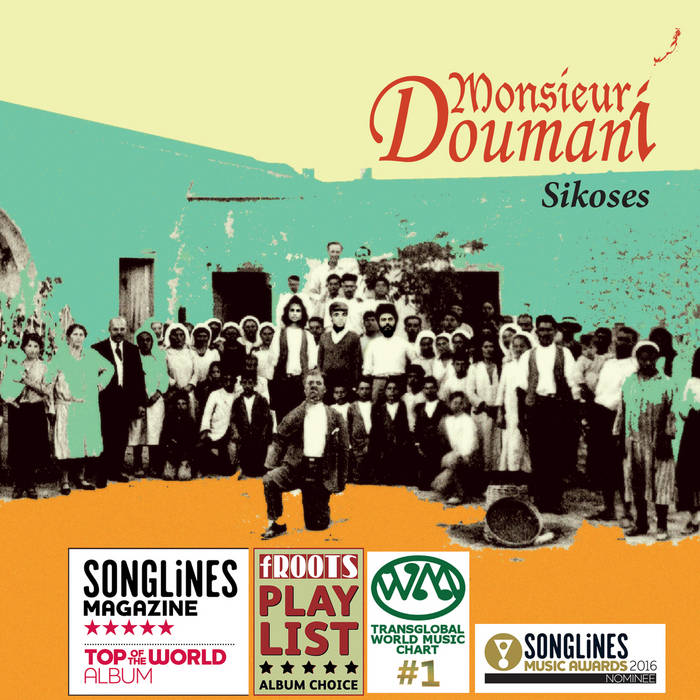 EleutheriaPL Can one disc embrace a cross-section of Cypriot folk reconceived, rough satire made canorous, dissonance expressed by consonance, a mature canon, a deft multiple progression, rhythmic frenzy & so much more? Would any mortal be capable of emulating the expression of all hues of emotions by means of a flute, from silky enthrallment over sonorant scorn to hoarse moan of confinement? Favorite track: Mandra / Μάντρα.

Sikoses is the second album by the Nicosia-based trio Monsieur Doumani. Their debut album Grippy Grappa, with its daring and innovative approach to Cypriot folk music, made Monsieur Doumani known to audiences around the globe, gaining them a nomination for Best Newcomer in the Songlines Music Awards 2014 and participation at WOMAD, Charlton Park, 2014. Despite the success of their debut, this time Monsieur Doumani has chosen not to follow the safe path, but to challenge themselves even further by venturing into unexplored fields. Adventurous and daring, they create original songs with reference to their rich Cypriot musical tradition. The group has moved to new territory, discovering a new voice, and experimenting with electronic sounds, while at the same time introducing elements from diverse musical styles. Folk music from parts of the world they have visited has been greatly influential in their new approach, (i.e. South Italy’s pizzica, folk music from Norway, the Balkans etc.) and is quite evident in Sikoses.

Their lyrics are becoming increasingly relevant to their country’s social and political affairs, whilst always keeping their satirical and humorous mood, which is evidently one of the main characteristics of the band. This, in combination with their popularity, essentially renders the group as a vital activist voice on the island, against corruption, social injustice, class discrimination and racism.


More information can be found in the liner notes of the CD.
www.monsieurdoumani.com
www.facebook.com/MonsieurDoumaniBand/